Alinta Chidzey is one of those talents that you just can’t define. Saying “triple threat” just seems to touch the surface! She has so many projects going on and has so many credits to her name that there just isn’t enough space to list them all!

But here’s me having a go …

She portrayed Anita in West Side Story, for which she received nominations for a Helpmann Award, Green Room Award, Sydney Theatre Award, two GLUGS Award nominations and won the Australian Dance Award for Most Outstanding Performance.

Alongside performing in Hugh Jackman’s – Broadway to Oz tour, she has become a fixture on The Production Company stage, playing Magnolia in Show Boat, Kathy Selden in Singin’ In the Rain, Svetlana in Chess, Niki in Curtains and, most recently, Mary Magdalene in Jesus Christ Superstar. For Chess, Alinta was honoured with a Green Room Award for Best Female Artist in a Supporting Role.

Alinta is frequently asked to perform at special events and concerts including the Melbourne & Queensland Symphony Orchestras. She performs regularly with her bands Alinta and the Jazz Emperors and Hook Turn Orchestra. Both of Alinta’s recently recorded albums will be available through her websites. 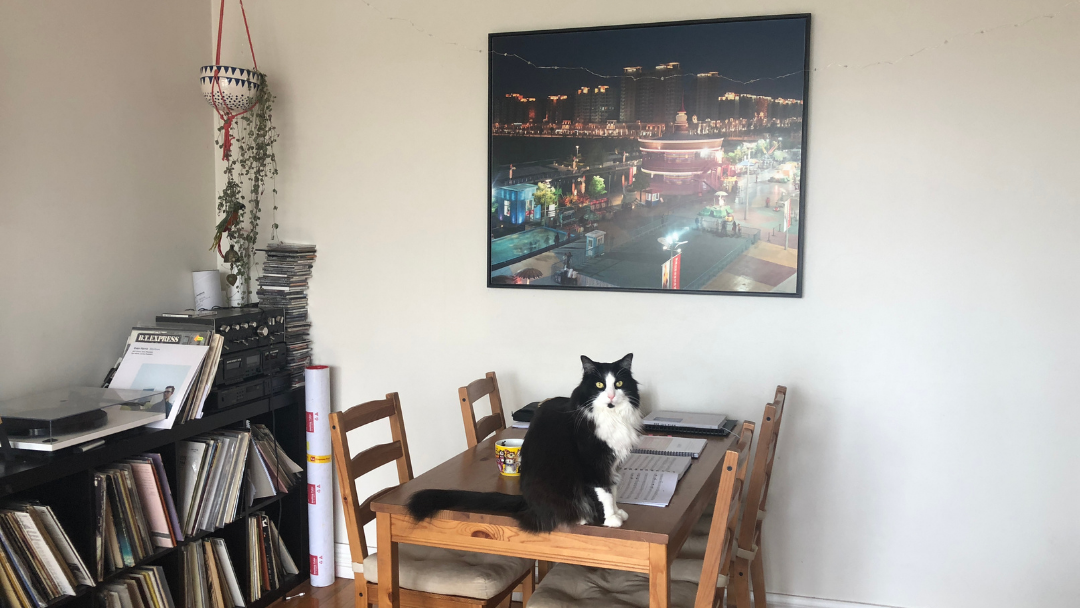 Where are you working from today?

I mostly work from my living room whether it be singing, writing, or learning scripts with my cat, Jetson on my lap, (when he feels like it). My husband, Remco works form our study so we occasionally battle for sound between my vocals and his saxophone through the walls of our apartment. Poor neighbours! Luckily I haven’t had any complaints…yet!

What are you working on?

Currently I’m preparing for my first album launch of Hook Turn Orchestra, an eclectic Melbourne ensemble of nine musicians from The Melbourne Symphony Orchestra and the Australian Jazz scene. I’m simultaneously learning my script and songs for ‘A Gentleman’s Guide to Love and Murder,’ a hilarious musical comedy where I’ll be playing the role of Sibella Hallward for The Production Company in October at The Arts Centre.

It’s always a juggle to keep all my passions afloat spreading myself between theatre, music, voice overs and film work, but at the same time I wouldn’t have it any other way.

Producing my own music and concerts for two bands (Hook Turn Orchestra & Alinta and the Jazz Emperors), I’ve grown a huge appreciation and respect for producers.

I’m realising how much administrative work goes on behind the scenes, the hours that goes into post-production of an album and balancing life with fitness, family and sleep! There truly needs to be more hours in the day… I take my hat off to anyone doing this with kids!

When you get stuck, what do you do?

Running, yoga or making a tea/coffee is my way of refreshing the mind. I’m lucky to be able to turn to my colleagues and husband to soundboard ideas or ask for help in areas that I’m unfamiliar with. I’ve noticed I’ve become less scared to ask for help as it was only myself getting in the way of getting things done at times. Be fearless I say!  I’m a list person and want to get things ticked off asap. And what better than to have a community of awesome proactive people to help each other out.

Who sees your earliest version / draft & at what stage?

Usually my husband, as we are in the same bands together and we live to together, so he cops all the questions, poor thing! Maybe it’s karma for him asking his Dad a question a minute when he was a kid. I’ve slowly learnt to be a better DIY Googler to not annoy him as much and probably save the marriage, ha! Having a great group of close friends/ family for feedback, self tests, running lines or lending an ear has been an absolute blessing in my artistic life. Thanks guys!

Alinta and the Jazz Emperors  www.jazzemperors.com